User registration is not enabled

Enter your email address and we'll send you a link you can use to pick a new password.

Fishing for Information: The Environmental Impact of Fish Farming

By Southern Land Exchange in Fishing with 0 Comments

Did you know that around 80 percent of all wild fish stocks are either fully exploited or in decline due to consumer demand from commercial fishing? With an ever-growing number of consumers on our planet, we are fast reaching a tipping point in finding ways to feed everyone. With that in mind, farming fish seems to be a more logical, ethical, and sustainable solution than commercial fishing if we are to feed the global appetite for seafood while reducing pressure on wild fish stocks. Unfortunately, the realities of the situation are not simple or rosy.

Across the globe, over 500 different aquatic species are raised and sold from aquaculture farms. Within this spectrum, farming methods and their impacts on the surrounding environments can vary greatly from region to region, along with the regulations that govern these operations and protect consumers and the environment. In this article, we’ll analyze and illustrate some of the worst environmental culprits, look to the future of fish farming, and learn about the people who are making it possible and sustainable. 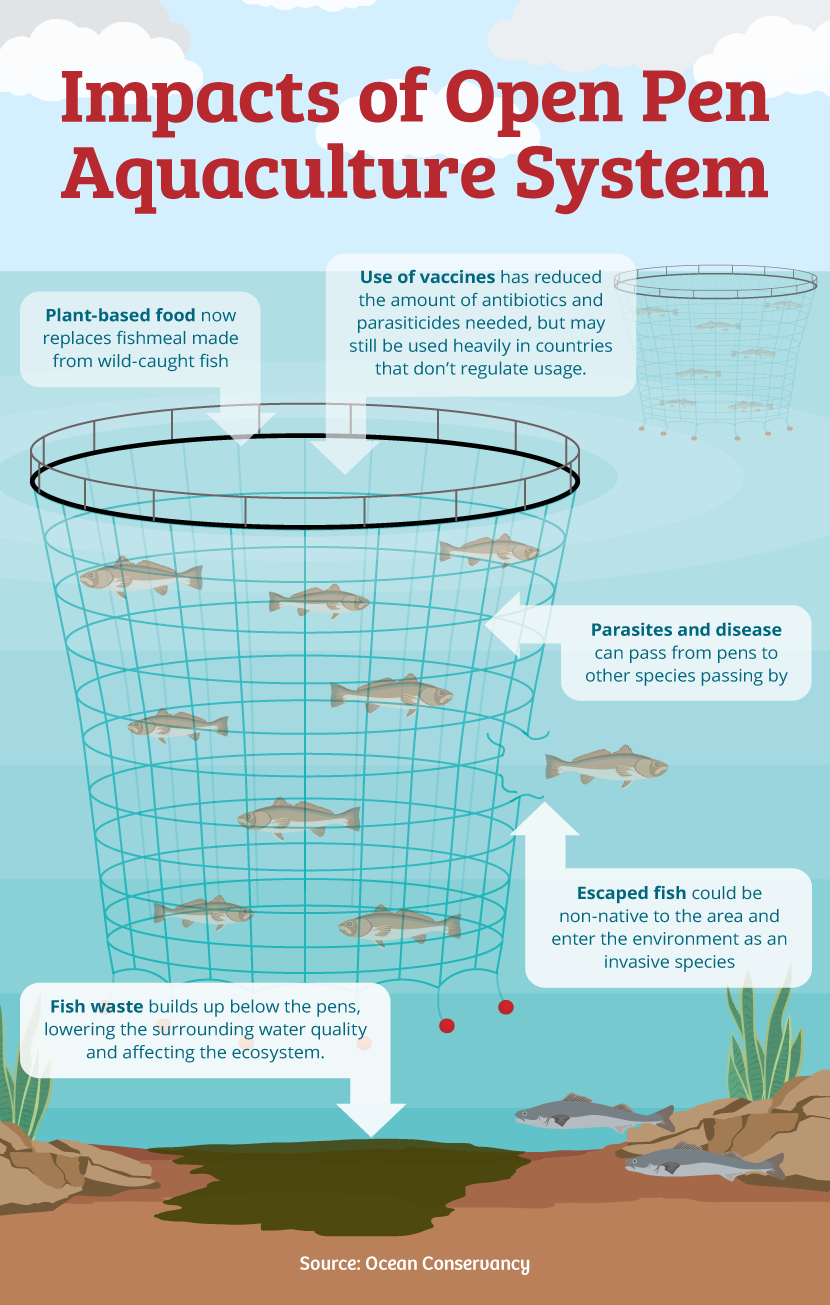 Farms like these can be found in offshore ocean areas and in freshwater lakes. Open net pens are, essentially, massive nets that hold fish in a particular location. Some of these systems can have a large impact on the local environment if they are not managed properly. In systems like this, non-native farmed fish can escape into the environment, waste from fish settles directly below the pens and lowers water quality, any antibiotics and chemicals used to keep the fish healthy directly enter the environment, and parasites or diseases can pass from the farm into local fish populations.

Farming practices across the globe differ from each other tremendously. For example, Atlantic salmon farms in Chile use huge amounts of antibiotics and chemicals to reduce parasites on their fish. These are massive farms that meet most of the demand for salmon in Japan and America. The aquaculture industry in Chile existed for years with little environmental monitoring or government regulation. More regulation and monitoring has started to take place there after three quarters of Chile’s Atlantic salmon stocks were lost from 2008–2011 due to sea lice and disease.

Meanwhile, U.S. farms in Maine reported using zero antibiotics in 2007 and 2008. In the years since, fish farms have continued to use antibiotics and parasiticides, but sparingly and only when needed. Maine farms have been following a set of best practices in which they regularly move pen sites to allow the ocean bottom to recover and choose pen sites that will have the least impact possible. This shows that a lower impact can be achieved with open pen systems. 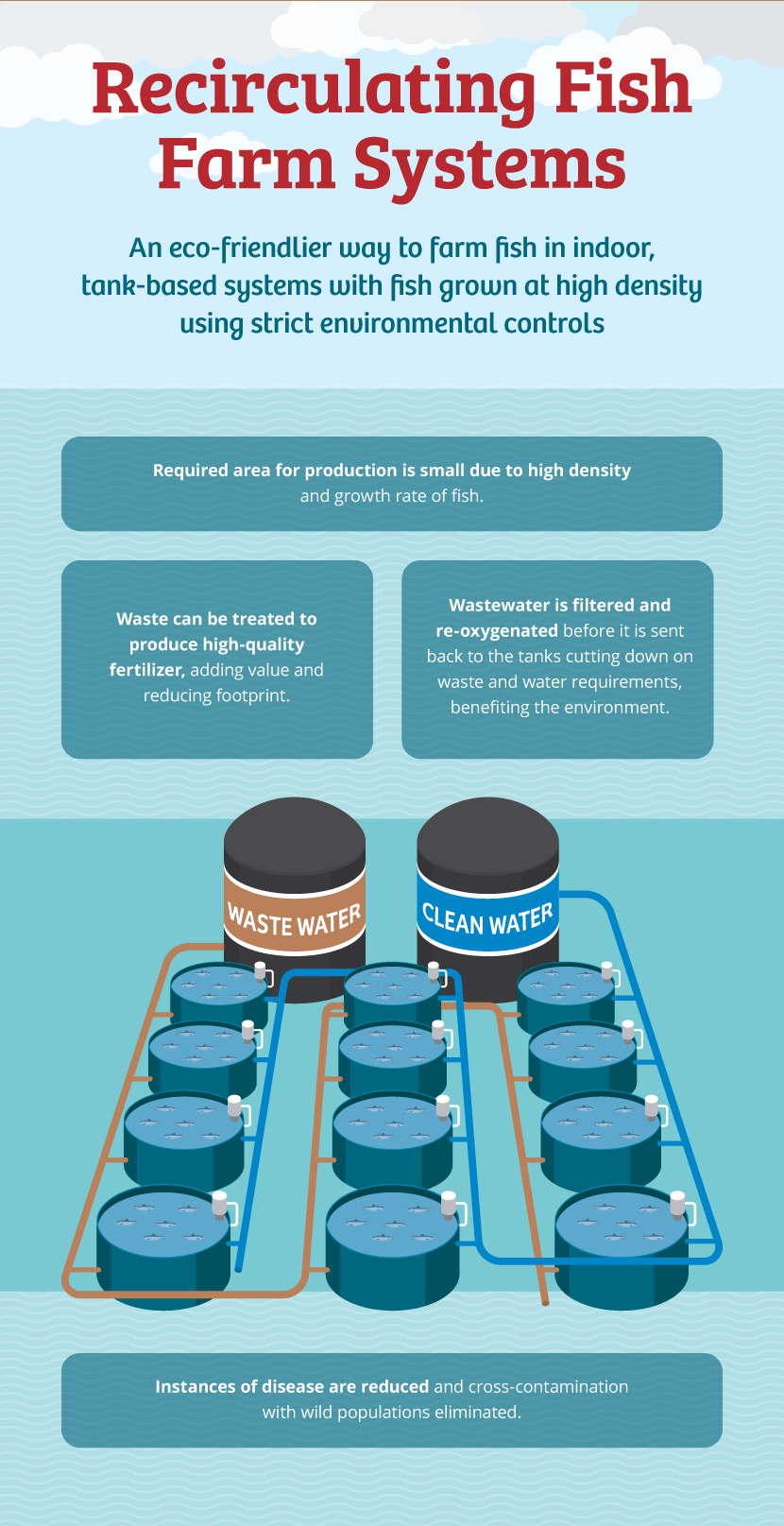 Recirculating systems are built inland, closed off from the rest of the environment, and have little to no impact on local water. In these closed loop systems, fish waste and dirty water are filtered and return to the fish as clean water. Any pollution or chemicals are prevented from entering the environment.

A variety of fish can be raised in systems like these: Tilapia, salmon, cod, and more. There’s even one company experimenting with bluefin tuna, a species that is chronically hard to farm. 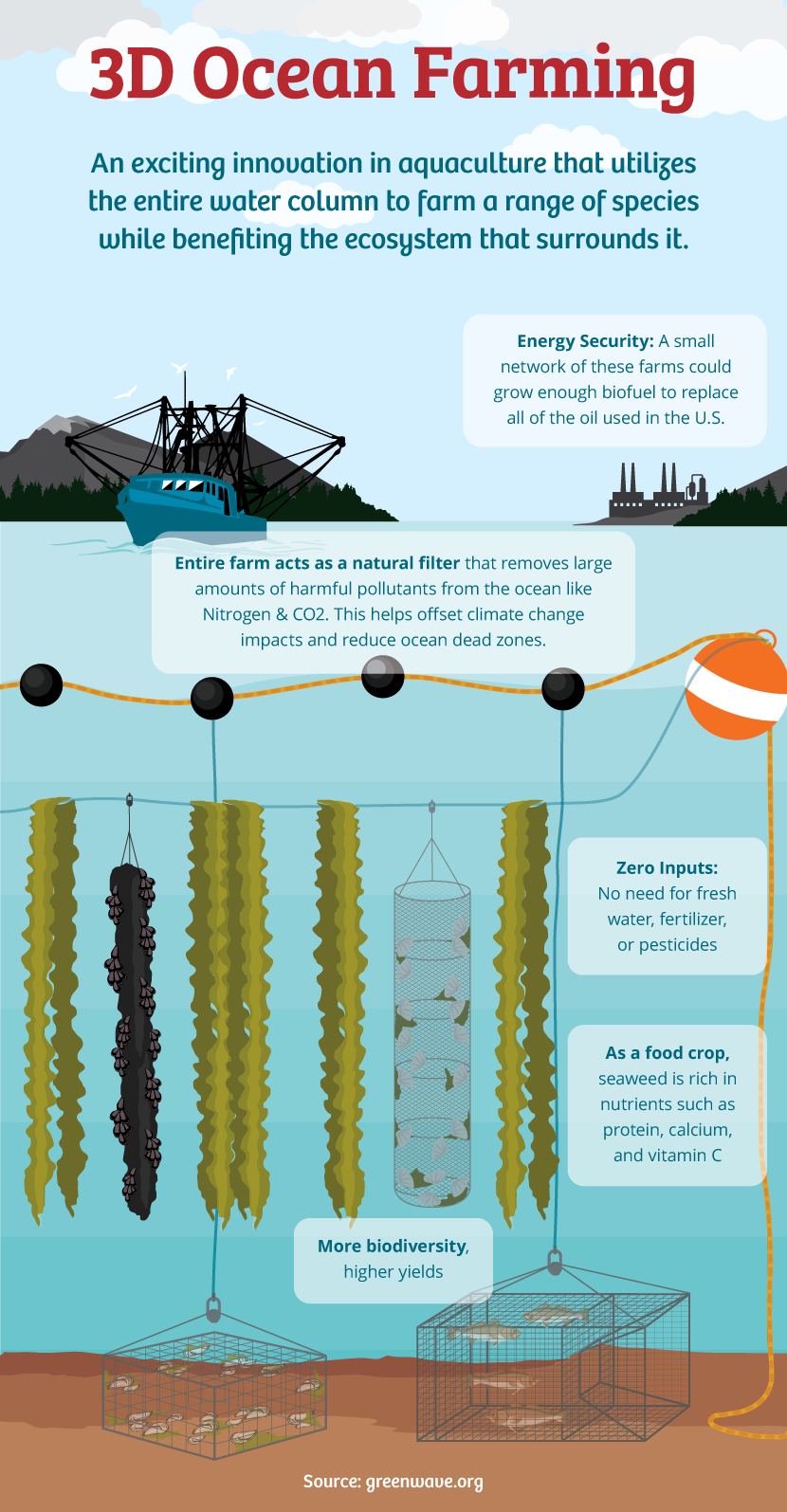 One exciting and new aquaculture method being pioneered right now has been dubbed 3D ocean farming. In these farms, the entire water column is used to grow kelp, scallops, muscles, and oysters, all of which work together to clean our oceans. The farms absorb carbon dioxide and nitrogen from the water, filter out toxins, and could be used as valuable tools to help mitigate the effects of climate change. These farms can be used to grow local food, organic fertiliser, biofuel, and more.

According to the U.S. Department of Energy, a network of farms totalling an area half the size of Maine could grow enough biofuel to replace all the oil used in the U.S.

Antibiotic Use, Fish Feed, And Other Issues

Aquaculture is an efficient farming method, compared to other industries. For example, it takes far less feed to raise fish then it does to raise a cow, which needs as much as eight pounds of feed for every pound of market ready beef. Here is a quick table.

Fishmeal used to be the primary feed for aquaculture fish. This resulted in large numbers of wild pelagic fish being caught and turned into fishmeal. But this feed has become too expensive, and farms choose to use a plant-based protein feed if they can.

Antibiotic use varies from country to country due to regulations.

A Word From Seafood Watch

Aquaculture has come a long way, and, if used properly, could even save our oceans. We reached out to Taylor Voorhees, senior aquaculture scientist at the Monterey Bay Aquarium’s famed Seafood Watch program, to talk about the past, present, and future of fish farming.

Voorhees says that aquaculture has come a long way in recent decades, and has made many improvements. One of the most significant, he says, is open pen farm siting. “It has been recognized that siting farms in deep, well-flushed areas with hard, rocky bottoms is better than in shallow waters with soft bottoms and poor tidal flushing, and that fallowing sites between production cycles is better than successive cycles in the same site. These strategies have helped to reduce impacts like nutrient loading and disease residency and persistence.”

Another improvement, Voorhees says, has been the way we feed farmed fish and manage their health. “Improvements in feed manufacturing and feeding strategies have also helped to reduce feed wastage and improve digestibility, which in turn results in fewer nutrient wastes discharged into the environment,” he notes. “Better fish health management plans have also helped to reduce susceptibility to some diseases, which improves overall fish health and reduces – but not eliminates – the need for antibiotics and other chemicals.”

Although these improvements have improved aquaculture, Voorhees warns that the future is not all bright. More work is needed, but things are looking better than they once did. “There are definitely still areas that need further improvement, and we’re hopeful that continued collaboration between all stakeholders will keep raising the bar for industry and environmental sustainability,” he says.

If you want to learn more about your favourite seafood and how it ranks in sustainability, visit www.seafoodwatch.org. It has a team of scientists that work directly with the industry to help ensure a future for our precious waters.

We help you buy and sell property. Buy recreational land for sale and hunting land for sale. Land real estate is our business, but the outdoors is our life.